An eery view from the demolished buildings of the Westerbouwing near the river Rhine. One can easily imagine that a German machinegun post could couse a lot of havoc on the part of river where the retreat took place. Specially around 6.30 in the morning when daylight breaks in.

By than, motorised boats were taken out of duty becouse of the intensified German firing. Countless ‘ferrys’ where active to get more than 2200 men across from around 21.00 hrs the evening before. The remainders had to swim across on their own accord. Able to swim or not…..

To commemorate this event on the very tail of the operation when the last troops left the ‘Witches Caldron’ in the night of 25th/26th of sept. ’44, two men crossed the river at approx. the same spot. The first time to be done on sunday 21st 1998.

The idea of extending the annual para drops on the Ginkel heath by organizing a para-folding bike race to the Arnhem bridge, was the kich-off for what led to an annual meeting with dozends off collectors and enthousiasts in the Oosterbeek region. The now diseased Marinus Velthuizen was one of the first to take initiative. The final part of the event that traditional saturday was the bonfire gathing at the riverbanks near the ‘old Church’.

A talk came up, ‘why nobody ever thought about the ‘wet final’ of the operation, while it had been give name ironically, ‘Operration Berlin’.

That gave Dick Maaskant and Rob van der Zon the idea to swimacross. 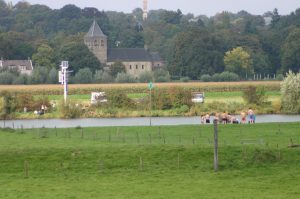 The weather was not in our favor nor was the current in the river Rhine. 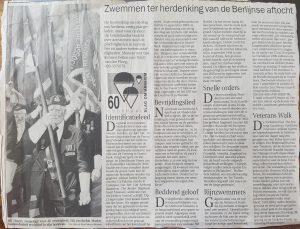 A year later some dozend people joined in to do the same again. Even an elderly woman of about 70years+ jumped in without hesitation. On the southern bank of the river a pre erected scaffold which held the words,

‘NOT ONE SHALL BE FORGOTTEN’

Due to the fact that the metal words were wrapped with cotton rags and soaked with an oily substance, from far a beatiful display was to be seen ones lit by flares.

Guys from the home defence unit, NATRES are arso taking part under command of Elco de Jong and beside swimming across with full uniform in so-called ‘float pack’ also acting out the ceremonial part at the wrath laying at the monument on the southern part of the Rhine. 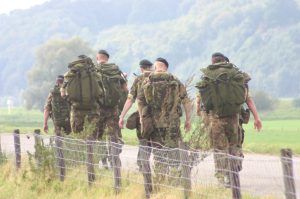 Dutch lads on their way being in their element 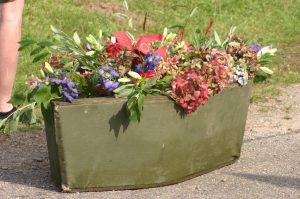 This dinghy was made as a folley to carry flowers across the river and over the dyke to the ‘Driel monument. 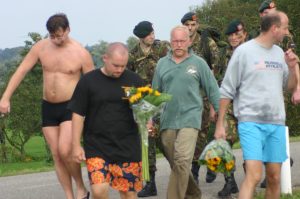 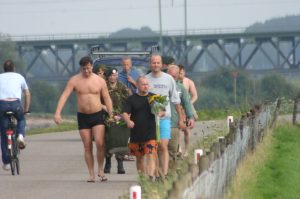 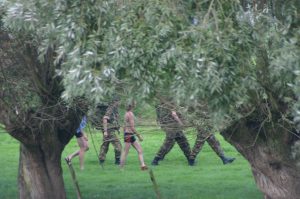 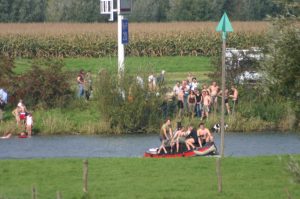 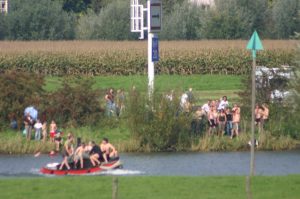 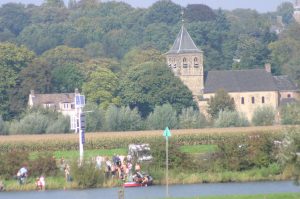 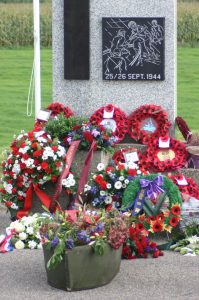 lkokl;After a few years, while the number of participants grew, a plan was risen to put some sort of marker on the very spot on which presumably the retreat took place in those dreadful  moments, 9 days after the initial landings.

In those days a steady guest was always to be seen at our september gatherings and always in for a fear share of lauhter acompanied by a good glass of beer. His name was Mervyn Potter and his wife Eileen. If there ever some sort of reminder of marker or monument there was to be situated, he should absolutely be the man to unveil it.

In his wartime period, during his presence in the surroundings of Oosterbeek, he was given the task of mechanical roadcleaning by means of handling the only Clark bulldozer ever there was to be put in action transported by a Hamilcar glider. The local scrapyard was the place to be for any suitable substancial material to be welded to an idea that was not yet set in a design.

It had to be so that my wife and I found a piece that quiet easily gave shape to a ‘poppy like’ base object of proper dimensions. Noting could be more apropriate as if it was put there for a purpose!

On that sunday the men were there 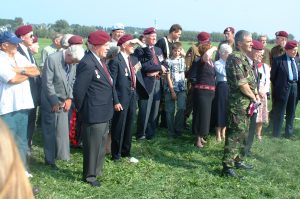 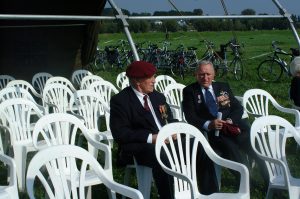 And we were there 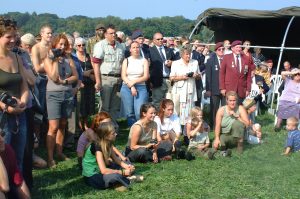 The idea was that a few helium filled balloons, not yet floating in the air were tied to a smal rope, connected to a veil covering the object. 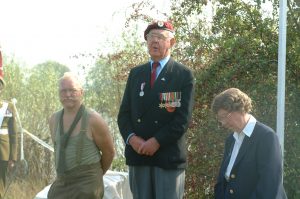 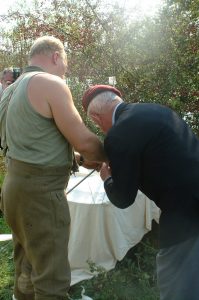 General dissapoinment over the balloons seemingly not big enough to lift the veil in once, was disturbed by a paraglider purposely rushing towards the balloons. By picking the balloons by his feet, so the rope, the veil was finally lifted thus the monument unveilled. 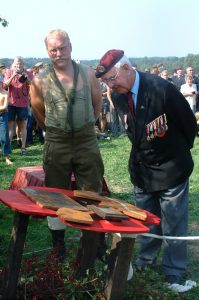 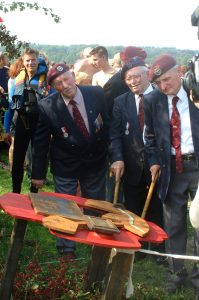 The monument is a tribute to all our foreign friends who showed unconditional readiness and faith to freedom we as occupied people of Oosterbeekso desperately longed for. 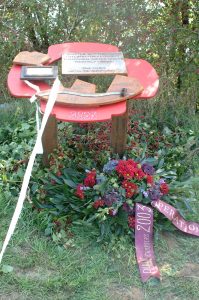 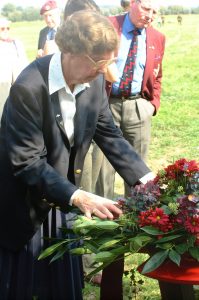